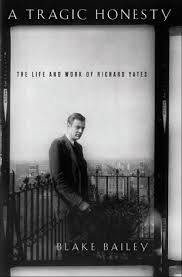 This is an autobiography of fiction writer Richard Yates.

I don't often read biographies of writers, but Richard Yates being my favorite, I decided to make an exception.
Unsurprisingly, Yates' life was as depressing as his books. Yates is certainly not the most pleasant of men; his alcoholism and impotence made him an insecure and angry men. His prejudices and occasional sexism would not help either.
However, his flaw as a husband, father, teacher, did not prevent him from being the most clear-eyed writer I know.

While Bailey does not seem to love Yates' writing as much as I do (in the sense that he is more critical of his plots), the understanding is all in the title: A Tragic Honesty. It is Yates' painfully brutal honesty as a writer that has tragically doomed him to be overlooked for so long.