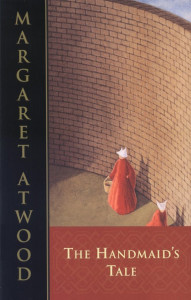 In the near future, the narrator's country has become a dictatorship in which she only serves as a womb.

The Handmaid's Tale is a 1986 Booker Prize winner.

The Handmaid's Tale is certainly, along with 1984, the most convincing dystopian novel I've read.
Offred, the narrator, depicts a world in which the authority controls absolutely every layer of its people's (especially women) lives, and Atwood is in that regard very thorough. All the details about the narrator's daily tasks, rituals, garment are painfully fascinating, and gradually reveal past tragedies, and how major political changes unfolded.
Atwood's major strength is her ability to write thoughtful, beautifully written page-turners, and THT is no exception to the rule.
While the ending isn't as satisfying as I'd wished, it is also something I've come to expect from the author.