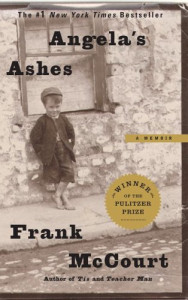 Frank McCourt's memoir tells the story of his childhood in New-York and (mostly) Limerick.

Angela's Ashes won the 1996 Pulitzer Prize for Biography or Autobiography.

McCourt's dealings with the extreme poverty of Irish-Catholic life in Limerick is shocking and unforgettable.
Cursed with an alcoholic father who spends all of his money drinking, Frank is raised by a mother constantly struggling to put enough food on the table of her many children. Despite the horrendous poverty and injustice, it is with a great sense of humor that McCourt recounts his days at school, in church, and in the filthy apartments his family barely affords, until he is finally able to move back to the States.
What ultimately makes this memoir so beautiful, is the author's ability to perfectly render the emotions and thoughts of a child who is puzzled by a seemingly illogical world.