I'm so behind on my reviews! 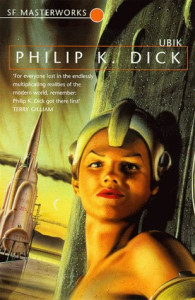 A team of anti-telepaths hires a mysterious woman who has the power to go back in time, but they do not trust her.

Philip K. Dick messes once more with reality and time in one if his most unsettling novels. Some people claim it's his masterpiece, but I personally do not think it equals the darkness and existential angst of A Scanner Darkly and Do Andorids Dream of electric Sheep?. However, Ubik is filled with chilling scenes that make it one of the most memorable Kafkaesque nightmares I've ever read.
Without spoiling the novel for anybody, I must admit the plot did not necessarily go where I wanted it to go, as I was particularly interested in the character of Pat and her ability to control time. But to my knowledge, no one reproduces the feeling of being dreaming (with all its layers of "realities") as well as Dick.
The more I read the work of Philip K. Dick, the more I lose hope of finding another SF writer I enjoy equally.