6:The Mayor of Casterbridge

audrey_e at Book 6:The Mayor of Casterbridge
6 THE MAYOR OF CASTERBRIDGE Thomas Hardy (England, 1886) 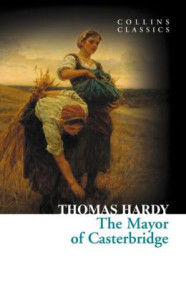 One night, in a fit of anger, a hay-trusser sells his wife and daughter to a sailor. Years later, when he has become the successful mayor of Casterbridge, his evil deed comes back to haunt him.

The Mayor... reads like a Greek tragedy, in which all the characters' actions have a clear effect by the end of the book. Call it karma or fate, Hardy describes a force that dooms the main character from the very beginning. What this means is that this is an incredibly well-constructed novel, and that it is often difficult not to feel sorry for the mayor, despite his pride and bad temper.
While the mayor is a complex character, the secondary ones are a little more conventional, which makes the plot seem a bit contrived at times. However, this has a lot to do with the conventions of the time.
This is not Hardy's best novel, as Tess and Jude are more memorable and less conventional, but it remains a great read for those who already enjoy Hardy's beautiful prose as much as I do.