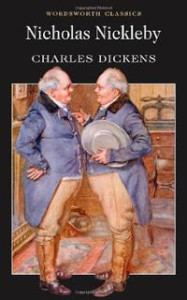 Following the death of their father, Nicholas Nickleby and his sister Kate have to learn to provide for themselves, but their greedy uncle is determined to make it even harder for them.

Among all the Dickens novels I have read, Nicholas Nickleby is the closest in form to David Copperfield (one of my favorite novels of all time), but it was written earlier in the author's career, and is less autobiographical and memorable.
Nicholas Nickleby might not be the best Dickens, it's still filled with characters and situations that make the novel worth the read. When Nicholas is forced to work at a school, Wackford Squeers (lol), the malicious schoolmaster and his family make effective villains, as the horrifying ways in which the children are treated are at once hilarious and tragic. The acting company Nicholas eventually joins also provides opportunities for many hilarious scenes. Nicholas himself is even a little less bland than are standard Dickens' heroes, even though he still obeys the moral ideals of the time.