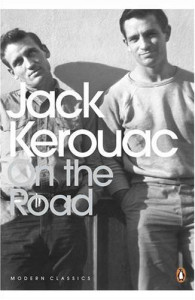 The title says it all.

I was afraid of this book because of what it represents to a good number of immature young men and hipsters, which is why  it took me a while to finally read it.
What surprised me the most about On the Road is Kerouac's obsession with Dean Moriarty (A.k.a. Neal Cassady). The book opens and ends with him. I found his character intriguing for unexpected reasons. If we can rely on Kerouac's rendition of the dialogues, Moriarty/Cassady was far from a well-spoken, intelligent man. His ideas seem simplistic and shallow for someone who became the muse of a generation of writers, and his speech is too erratic to be charismatic. In the end, what was truly fascinating to me, was Kerouac's fascination itself, and my inability to understand it.
On the Road made me roll my eyes multiple times, for the reason stated above, as well as its unapologetic misogyny. Kerouac's hyperbolic comments also tend to be exhausting fairly quickly, which is why it's not a book that should be read in one sitting.
Having said that, Kerouac's style still managed to seduce me as it did so many before me. The oral quality of it draws you in against yourself, and even when the content fails to be as interesting as it tries to be. There is something so profoundly American about his approach to life and writing, that he will make you see stars where there's only a dusty road.