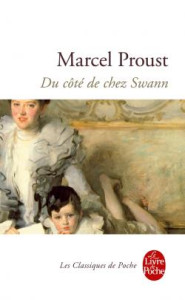 First volume in " In Search of Lost Time", Swann's Way is about the author's recalling his childhood in the countryside and his first love, as well as the story of Swann, a family friend obsessed with a courtesan.

Those who have never read Proust, have usually at least heard of the very long sentences he is famous for. Moreover, his method of writing is regularly compared to the "stream-of-consciousness" approach used by writers such as James Joyce or William Faulkner. For these reasons, and even though I love the work of the writers aforementioned, I was afraid of Proust.
As it turns out, Proust is far more accessible than Joyce or Faulkner.
Proust's style is very lyrical, and I was quickly drawn into the slow-paced rhythm of his long sentences. His metaphors are particularly beautiful.
I have to admit the section that focused on the narrator's childhood (the longest one by far), was the most compelling. Proust tends to repeat his ideas a lot, and because this section is about personal memories, the repetitions are more justified than when the narrator turns to his neighbor's love story.
While Proust is far less experimental in his writing style than I expected, Swann's Way was a highly enjoyable read, and I'm looking forward to reading his other novels.