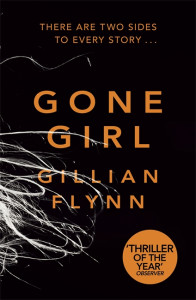 One morning, Nick wakes up to find that Amy, his wife, has disappeared. As the investigation progresses, all the evidence point towards him as the murderer, and the marriage that seemed ideal at first, is revealed to be a lie.

The story is told from the perspective of both Nick and Amy.

Despite my general lack of interest in thrillers, I wanted to see for myself what the hype was all about.
Gone Girl's main strength is the quality of Flynn's writing, an aspect the genre is not particularly well known for. There are a lot of positive things to say about this novel; the two voices are truly distinct and captivating, the insights on marriage are relevant and the ones on the terrible relationship between the media and justice even more so (it was my favorite aspect of the book), and the action is fast paced.
Overall however, Gone Girl was not as compelling as I expected it to be from others' reviews. I guess my final opinion is tainted by the fact that so many people kept saying how "dark and twisted" it was, when it was no more so than what I would expect from a dark thriller (yes, I read James Ellroy). Moreover, there were plenty of answers that did not satisfy me because I thought they were simply too hard to believe. And that's what seriously damaged my overall experience.
Nevertheless, Gone Girl remains a great summer read, and another proof that "well-written" and "fast-paced" can exist together.