audrey_e at 20 The Pirate Hunter
20 THE PIRATE HUNTER: THE TRUE STORY OF CAPTAIN KIDD Richard Zacks (US, 2003) 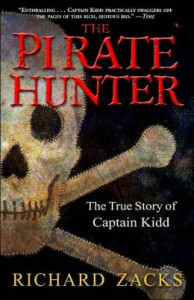 This is a biography of Captain Kidd and his enemy Robert Culliford.

As it turns out, the real Captain Kidd has nothing to do with what the legend says. Originally, Captain Kidd was sent across the seas by the Crown with the mission to hunt and punish pirates. But a mutiny causes Kidd to lose the Crown's favor. He is eventually accused of piracy and put on trial. An ironic ending for one that was sworn to do away with piracy.

A long time admirer of Robert Louis Stevenson's work, it was interesting to read a "real" pirate story. Unfortunately, as with most things in life, fiction is more exciting than reality. I believe Zacks did not have much material to write a truly engaging biography. It's clearly not a lack of research, it's just that there is not much to the story in the first place.

Having said that, it was not a painful read, and I learnt a few things about the time.

Recent Posts from This Community