18 Fear and Loathing in Las Vegas 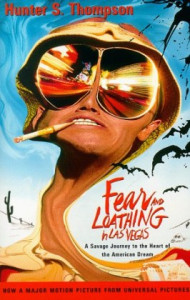 The narrator and his lawyer drive to Las Vegas in order to write an article on a major sports event, but all they care about is doing drugs.

As much as the ideas behind Gonzo journalism are interesting, I was not as impressed by this book as I wanted.
While the descriptions of the effects of drugs are very vivid, and the dialogues impeccable, this entire book felt pointless. Often times I felt like saying "those drugs are crazy, I get it. But what else do you have to say?"
I think that writers such as Bret Easton Ellis and Jay McInerney do a better job at capturing a generation and making social commentaries when they write about drugs than Thompson.
Perhaps Thompson belonged to a generation I understand less, and I have to give him credit for being one of the first to go to such extremes in his descriptions.
I still think the book is far superior to the film; the latter being close to unwatchable.