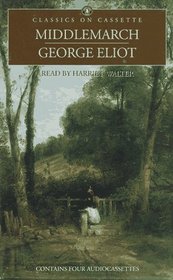 The coming-of-age stories of young people in the town of Middlemarch.

My first encounter with George Eliot was years ago with Silas Marner, which made no impression on me. I decided to try again with her most famous novel.
I usually love 19th Century novels, as well as bricks, but this one was just too hard to get through.
I understand what makes Middlemarch acclaimed. It is satirical, witty, and exposes the plight of women in a way that's very much in advanced for its time. But despite its scope and the effectiveness of its language, Eliot's novel feels lifeless. I simply did not care about her characters. Not because they were flawed, but because they did not feel real. It seemed that their sole purpose was to teach the reader a few lessons. And unlike in the books of Thackeray or Dickens, the moral lessons were so obvious and repetitive that they made me regularly roll your eyes at them.
Going back to Thackeray, it is sad to say that Eliot's style is an inferior version of his, since Vanity Fair is far more memorable and subtle (well, subtle compared to Middlemarch that is).