Harry Truman's selection as Franklin Roosevelt's running mate in 1944 was a big surprise to everyone, including Truman himself. Roosevelt was in poor health and was not expected to live out his term and the nation was still fighting a two front war. Truman, a former haberdasher and failed businessman from Missouri, did not inspire confidence as a replacement for the iconic FDR at such a precarious time in history. When Roosevelt died in April of 1945, Truman told reporters that it "felt like the moon, the stars, and all the planets had fallen on me." 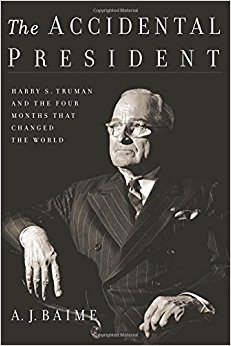 Longtime Wall Street Journal contributor A. J. Baime tells the story of Harry Truman's remarkable transition from county politician to leader of the free world in The Accidental President: Harry S. Truman and the Four Months that Changed the World. This is a remarkably well-researched account of the beginning of the Truman Presidency and the end of the Second World War, a war that was ended by the most controversial wartime decision likely made by any president: the decision to use the atomic bomb against Japan in August of 1945.

Baime begins with an accounting of the day that Vice-President Truman became President Truman, before embarking on Truman's life story, told in the perfect amount of detail, enough to know how Harry Truman became the man that would come to confront the world's greatest problems. The author introduces the 33rd President to the reader in his many dimensions: Truman the family man, Truman the Jacksonian Democrat, Truman the poker-playing good old boy. Baime's accounting of Truman's first four months as President puts the reader right in the Oval office and paints a picture of a Harry Truman as a man who makes decisions quickly, without wavering. He also provides a fascinating account of the relationship between Truman and Winston Churchill and Joseph Stalin, and has the reader shadow Truman at the historic Potsdam Conference.

This book is not only about Truman. It also ably tells the story of the development and the deployment of the atomic bombs that fell on Hiroshima and Nagasaki. Baime has the wonderful ability to make the reader that he or she is witnessing these events as they occur from close vantage. His accounting of the actions and emotions of the crew of the Enola Gay (the plan from which the first atomic bomb fell) is fascinating. His extensive use of Truman's diaries, as well as the personal first-hand accounts of many of the participants who were present at these events enhances the reader's feeling of watching these events at the time of their occurrence. Baime also has that wonderful author's gift of being able to tell the reader something he or she did not know before. For example, we learn of Joseph Stalin's revelation to Truman of the Russian leader's belief that Adolf Hitler was alive and living in South America, or of how Truman dressed down a sleazy army officer who offered to act as a pimp for the President at Potsdam.

At times, Baime seems too enamored with Truman to consider that his subject may have had faults. Truman was schooled in the bare-knuckled political academy of the corrupt Pendergast machine and while the author acknowledges the shady dealings of this organization, he is convinced of Truman's absolute honesty. Truman made a lot of snap decisions, and while he was decisive, the author never questions whether Truman was too hasty at times in some of these snap judgements. But it is hard to question the author's objectivity, given the depth of his research and the completeness of his description of the circumstances surrounding the challenges Truman faced. The author provides an especially well-considered post mortem of Truman's decision to unleash the first nuclear weapons, providing his own defense of why he believes Truman was correct in doing so. 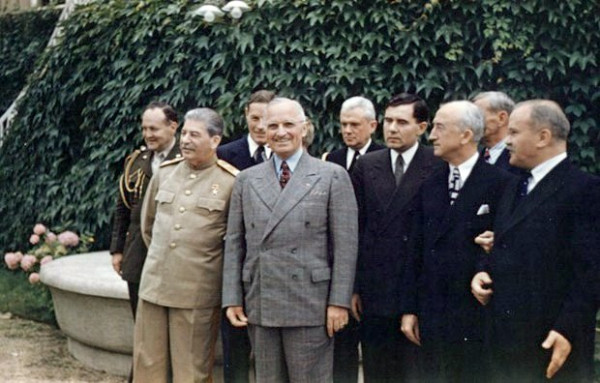 Baime serves up excellent history in telling a remarkable story of unique circumstances that placed the under-estimated ordinary guy from Independence in the position of having to shape the world that we live in today. He does so in a manner that is thorough and complete, informative and insightful, and which makes the reader feel present and close at some of the most interesting events in recent history.
Collapse