The great thing about reading history written in the exceptionally enjoyable style of author David Pietrusza is that we the readers learn so many things that we didn't know before. This is certainly the case in Pietrusza's latest work 1932: The Rise of Hitler and FDR in which Pietrusza traces the background of the two men who would be most prominent during the second world war, culminating in an in depth accounting of the year 1932, one which would lead to both men attaining the presidency (in Hitler's case the Reich Chancellery) of their respective nations. 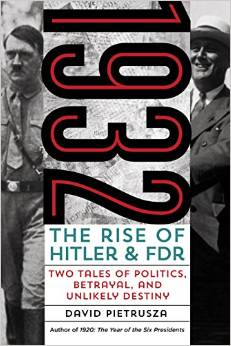 It was a time when, as reporter Dorothy Thompson had observed, "post-war Europe was finished and pre-war Europe had begun." Ditto for America, Pietrusza adds. It is a fascinating time for historians to study, but it must have been a very stressful and frightening time for those who had to endure it. In Germany, citizens were living through the aftermath of the first great war, and the devastating economic results not only of the war, but also of the Treaty of Versailles and the nation's reparation obligations. It was a time when politics were a mess, much more so than typically. Political allegiances were splintered along the political spectrum like light through a prism as hopelessness and despair caused the disenchanted masses to turn to whatever political direction suggested rescue from their fears. Fascism had taken root in Italy. It was a time when political strife meant more than just angry words and insults, as violence became commonplace within many political movements. Angry Germans looked for a target for their rage and many found one in the wealthy Jewish class. Through it all, octogenarian Chancellor Paul Hindenburg struggled to keep the country from crashing down on itself. Pietrusza generally has a remarkable ability to provide the reader with an understanding of complicated historical situations, and he very capably explains how Adolph Hitler, an Austrian-born misfit came to become a powerful Svengali-like figure to the masses and ultimately one of history's greatest monsters.

Across the Atlantic Ocean, the prosperity of the 1920s gave way to the Great Depression as economic catastrophe struck the nation. Through it all, President Herbert Hoover transformed from the Great Humanitarian and the Great Engineer to a man out of his depth both in tending to the nation's ills, and in instilling confidence in and empathizing with an embattled people. Once again Pietrusza provides the reader with an understanding of how, against all odds, polio-stricken Franklin Delano Roosevelt, a man seen by many as a political lightweight, rose to prominence and popularity to capture the support of his party and ultimately the presidency.

Normally Pietrusza is able to ingest a fair amount of levity and amusement into his books, but this task is much more challenging, given the subject matter of this book. It must have been a mentally exhaustive exercise for the author to research and write this book, especially given the volume of treachery and human misery that is part and parcel of the Nazi rise to power, not to mention the struggle for those living through the depression. The author continues to draw from his well-stocked cupboards of things most people didn't know before and many of these are strewn throughout this book. These include Winston Churchill's presence in New York at the time of the stock market crash, Hitler's disturbing relationship with his teenage niece (and her subsequent suicide), the animosity between FDR and Al Smith, Hoover's authorization of a Watergate-like break in of Democratic headquarters, and Eleanor Roosevelt's close relationship with journalist Lorena Hickok. I found his description of the 1932 bonus march incident especially interesting, and much more considered than usual accounts which generally place the blame on General Douglas MacArthur. Not so fast, says the author.

Knowing how well Pietrusza writes and how good his previous year-in-review themed books have been (1920: The Year of Six Presidents, 1948: Harry Truman's Improbable Victory and the Year that Transformed America and 1960 - LBJ vs. JFK vs. Nixon: The Epic Campaign That Forged Three Presidencies), the bar was set quite high for the author by those of us who awaited the release of this book. But the author once again lives up to his exemplary standards. In his latest work, David Pietrusza yet again displays his ability to analyze, distill, explain and supplement history's most fascinating years and its most fascinating personalities, and in the process he gives those of us who love to read history another excellent and enjoyable literary experience. 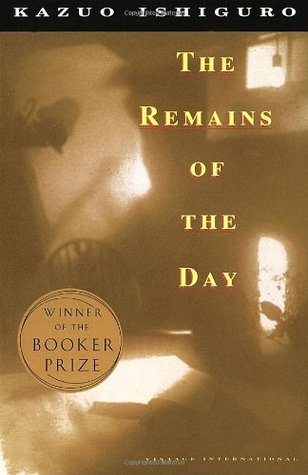 The Remains of the Day is a profoundly compelling portrait of the perfect English butler and of his fading, insular world in postwar England. At the end of his three decades of service at Darlington Hall, Stevens embarks on a country drive, during which he looks back over his career to reassure himself that he has served humanity by serving "a great gentleman". But lurking in his memory are doubts about the true nature of Lord Darlington's "greatness" and graver doubts about his own faith in the man he served.

He is the very model of a modern majordomo.
Verdict: Exquisitely written and as English as English can be, Remains of the Day won the Man Booker Prize in 1989. Beneath the surface of this polite little period piece about a fading world of English manor houses is a complex character drama and a moral fable. 9/10.


Also by Kazuo Ishiguro: My review of Never Let Me Go.

audrey_e at Book 2: Life During Wartime
2 LIFE DURING WARTIME Lucius Shepard (US, 1986) 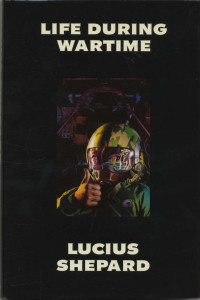 Soldier David Mingolla is stuck in the Guatemalan jungle, at the center of a complex war.

Like many other Sci-Fi novels of the 80s, Life during Wartime is inspired by the Vietnam War.
I thoroughly enjoyed Sheperd's writing, and from a stylistic point of view, the confusion in which he throws his reader. This is typically the kind of Sci-Fi I'm interested in, less concerned with technical details and world building, and more focused on human psychology.

Unfortumately, Shepard lost me early on in the novel, and I found myself keeping reading more for the style and the atmosphere, than the story I failed to understand. The complexities of the war simply proved too intricate for me.