The continuing adventures of Hope Corrigan, the superheroine known as Astra.
( Collapse )

Historians and life partners David and Jeanne Heidler explore what it must have been like for George Washington to form the first national government in their 2015 work Washington's Circle: The Creation of the President. Central to their analysis is an intimate examination of the many relationships between the reserved and poker-faced first President and the men (and women) that he came to rely on as cabinet members, friends and confidants. The authors explore both the relationships between Washington and his "circle" and how Washington weathered political storms, challenges, betrayals and public criticisms as he steered the ship of state through uncharted waters. 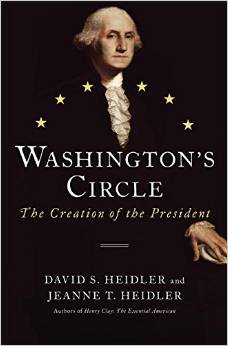 While this book focuses primarily on Washington's two terms as his nation's first president, the authors also furnish a portrait of their central subject's life prior and subsequent to his presidency. They illustrate how Washington's ability as a strong decision maker was influenced first by gathering a wealth of opinion, information and advice from those he relied on. These included the members of his cabinet, former fellow soldiers, influential members of Congress and later on his Vice-President, John Adams. But as the authors ably show, these were not fixed relationships. They evolved over time in their degree of trust and loyalty. Washington was confronted by divided opinions within his circle of advisors on such issues as neutrality vs. ties to either France or England, support or contempt for the French Revolution, a strong central government vs. states rights, how best to handle resistance to revenue collection, and the ultimate creation of political parties. Amid these challenges, Washington also faced very human issues such as health problems, family issues, sensitivity to criticism and a longing to return to his home in Mount Vernon. The authors do an excellent job of dissecting how Washington endured all of these challenges.

As interesting as Washington are the cast of supporting characters in his circle of influence. These include Vice-President John Adams, members of the first Cabinet: Secretary of State Thomas Jefferson, Treasury Secretary Alexander Hamilton, Secretary of War Henry Knox and Attorney-General Edmund Randolph. Each of these persons have interesting biographies and personalities in themselves and each conducted themselves in differing ways amid the growing pains of a new nation. The authors also explore Washington's relationship with other fascinating characters such as James Madison, John Jay, Gouverneur Morris, Robert Morris and the Marquis de Lafayette. Washington's relationships with those closer to home are also explored, including his aide Tobias Lear, members of his family and his friend and frequent correspondent Eliza Powel. In the course of dissecting these complex connections, the authors dispel the myth that Washington was a lone wolf, and show how much of his strength came from the fact that he had such a diverse circle of those he relied on.

At times it seems that the authors take too great liberties in their speculation as to what was in Washington's mind, especially given what we are told about the stoic nature of the man. They can be forgiven for this, given the degree of research that they have undertaken, as well as their lack of any personal agenda. Often people attempt to mold Washington into someone who matches their own ideology. These authors do not appear to have any such hidden intent. What comes through in the book is their sincere desire to understand the man, both in their capacity as scholars and as persons whose gratitude for all that Washington was able to accomplish is apparent. Their passion never seems to overcome their sense of fairness and objectivity and they succeed as best as 21st century historians can in showing us what it must have been like to be around George Washington and to be George Washington as he guided a new nation through unprecedented and dangerous times.
Collapse