The next book in my project of re-reading all the fiction I own (that is still on the shelves) is All the Windwracked Stars, by Elizabeth Bear. I actually replaced it with a Kindle version before re-reading it, along with buying the next two in the series (the series as a whole is called The Edda of Burdens). I know I've read this before, as I at least recognised the names of the protagonists and something of the world it is set in, but I remembered very little of the actual story so I might as well've been reading it for the first time.

We open with the end of the world in the aftermath of an apocalyptic battle, with the survivors - Kasimir, valraven steed of a slain waelcyrge; Muire, child of the Light, one of the wardens of Valdyrgard, poet, historian, metalworker; the Wolf, older than the world itself and has played his part in the ending of it. And after a chapter that establishes the characters (particularly Muire) the story jumps forward nearly two & a half thousand years to the aftermath of another apocalypse. As the book puts it:

Worlds, like gods, are a long time dying, and the deathblow dealt the children of the Light did not stop a civilization of mortal men from rising in their place, inventing medicine and philosophy, metallurgy and space flight.

Until they in turn fell, two-hundred-odd years ago, in a Desolation that left all Valdyrgard a salted garden. All of it, that is, except the two cities - Freimarc and Eiledon - that lingered. Life is tenacious. Even on the brink of death, it holds the battlements and snarls.

And in this end of the world, Muire, Kasimir and the Wolf still live among the shattered remnants of the human civilisation. It's a world of both technology and magic - where at one moment there are recognisable computing devices, and at another we're meeting a modified catwoman created from a cat, sorcery and a relic of the past or a modified ratman mage-engineer. The story is primarily Muire's, although parts are from other points of view. But she's the central figure, and we follow her from grief-stricken survivor's guilt through to a realisation that perhaps the world can be reborn (albeit at great cost to herself).

Click here to read the rest of my review on my blog.

James Buchanan regularly ranks among the worst of the Presidents of the United States in ratings done by historians and scholars. He is criticized for his weak and ineffective response to the coming of the secessionist crisis, his obsequiousness to the southern slave-holding political powers, his ethical impropriety in seeking to influence the outcome of the Supreme Court decision of Dred Scott v. Sanford, his backing of the pro-slavery constitution in Kansas when a majority of Kansans opposed slavery in their territory, his inaction as southern cabinet members raided federal resources for their own cause on the eve of the civil war, his refusal to axe corrupt cabinet members, and the fact that he is the only president to leave office with fewer states then when he entered it. It's quite a shopping list of failings for which many argue that Buchanan has earned the title of "worst president ever." 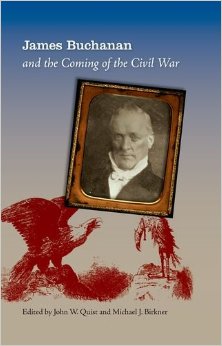 In September of 2008, an all-star team of Buchanan scholars gathered at Buchanan's estate (and now his Presidential museum) called Wheatland in Lancaster, Pennsylvania for a symposium on the Buchanan Presidency. This delightful nerdfest of Buchanan historians produced James Buchanan and the Coming of the Civil War, a collection of essays on various aspects of the Buchanan Presidency leading up to the civil war, written by the great minds on the subject of all things James Buchanan.

This book has limited appeal and you have to be a real history geek to enjoy it as much as I did, but for anyone with an analytical mind and a love of antebellum US history, this is pure gold. Edited by respected historians John W. Quist and Michael J. Birkner, the book covers many of the most interesting aspects of Buchanan's presidency, including the Dred Scott decision, the "Utah War" with Mormon leader Brigham Young, a comparison of the reactions of Andrew Jackson and Buchanan to the threat of southern secession, Buchanan's foreign policy, the Kansas Constitutional Crisis, a contrasting of Buchanan with contemporary political figures, and a look at Buchanan in retirement during the Civil War. My favorite chapter of the book is a verbatim transcript of a Q & A session with eminent historians William Freehling and Michael Holt, full of what ifs and Monday morning quarterbacking of the Buchanan Presidency.

This is a history geek's treasure trove. While this book's appeal is to a limited audience with a unique taste, if you find yourself among the subset of people who enjoy an in-depth analysis of the prelude to the civil war or antebellum US history, then you will love this book.
Collapse