“A Thousand Years of Good Prayers” is a series of short stories by Yiyun Li, who has refused to allow them to be translated into Chinese because she still wants to be able to visit her family in mainland China and doesn’t wanted the government too annoyed with her to allow it.

The stories deal with people of all classes, genders, and ages, but the one common thread is struggling with the contradictions of Chinese life, especially the contradictions created when government policy or cultural expectations collide with reality or real emotions. The prose is simple and straight forward, but more evocative because it is just enough to touch you but doesn’t distract. 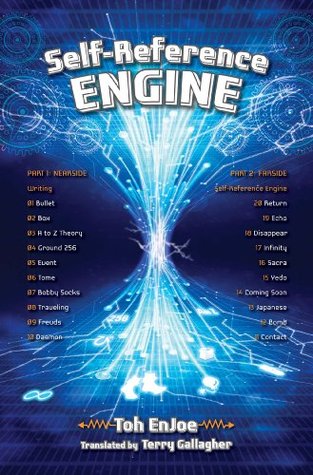 Instructions for Use: Read chapters in order. Contemplate the dreams of twenty-two dead Freuds. Note your position in spacetime at all times (and spaces). Keep an eye out for a talking bobby sock named Bobby Socks. Beware the star-man Alpha Centauri. Remember that the chapter entitled "Japanese" is translated from the Japanese, but should be read in Japanese. Warning: if reading this book on the back of a catfish statue, the text may vanish at any moment, and you may forget that it ever existed.

From the mind of Toh EnJoe comes Self-Reference ENGINE, a textual machine that combines the rigor of Stanislaw Lem with the imagination of Jorge Luis Borges. Do not operate heavy machinery for one hour after reading.