Here is an update on what's new for

potus_geeks and other US history geeks on the bookshelves for 2015 so far. Some of these are late 2014 publications, while others are scheduled for release later this year. I hope you see something in here you like.

If there are ones I've missed, please let me know. There is a bushel of books about Lincoln due out to coincide with the 150th anniversary of his assassination. Some of those can be found here. 2015 isn't looking quite as prolific as 2014 was, but there are still many outstanding books on the horizon.

Author Michael Wolraich chronicles the political transition in the United States in the beginning of the twentieth century from conservatism to progressivism in his excellent 2014 book entitled Unreasonable Men: Theodore Roosevelt and the Republican Rebels Who Created Progressive Politics. The book begins with Roosevelt's first term in the White House, completing the one begun by the assassinated William McKinley. It follows Roosevelt through his first election to the presidency in 1904, the transition to his successor William Howard Taft, and finally to the election of Woodrow Wilson in 1912. This is not a biography of Roosevelt however. It is the story of the rise of the progressive movement in the United States from a small fringe group to the dominant political philosophy in the nation a century ago. 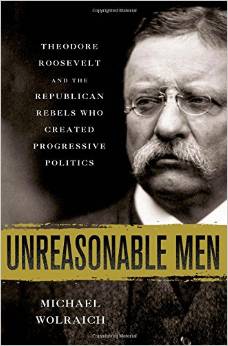 The story centers around six men who were the political movers and shakers of their era. Three were Presidents: Theodore Roosevelt, William Howard Taft and Woodrow Wilson. Three were congressmen: Senator Nelson Aldrich was the wealthy patrician Republican leader of the conservative faction that controlled the senate. Joseph "Uncle Joe" Cannon was the venerable Speaker of the House of Representatives who also exerted control aligned with the conservatives and who rewarded his friends and marginalized those who disagreed with him. Finally, there was Robert "Fighting Bob" LaFollette, the Moses of the progressive movement, who rose from a minor voice of dissent to become the most prominent progressive.

The story of the clash of egos within the progressive movement is especially compelling. Roosevelt, who sought to accomplish much by the force of personality alone, was not as dogmatic as President as he would later become. His philosophy was that "half a loaf was better than none" and that getting part of what he wanted from a conservative congress was better than getting nothing. Conversely, LaFollette believed that it was better to lose a battle for the whole loaf, than to compromise. This divergence in approach would ultimately lead to a schism in the Republican party, ending the party's dynasty in the White House and in a three-way fight for the presidency that would elect Woodrow Wilson. The remarkable thing is that, while the Republican party split in the process, the call for progressive reform remained strong. Wolraich demonstrates how it was an idea whose time had come.

Wolraich is a very able writer who manages to explain subjects like tariff reform, central banking and other technical topics into an interesting and engaging way. It is his insight into human nature however that makes this an especially good read. He excels both as a policy analyst and as someone who can derive and communicate the motives of his central characters. He does so in a Goldilocks fashion: not too wordy, not too superficial, just the right amount of information. This is intelligent and captivating history of a fascinating, but overlooked period of American politics, told by a brilliant and talented author.
Collapse