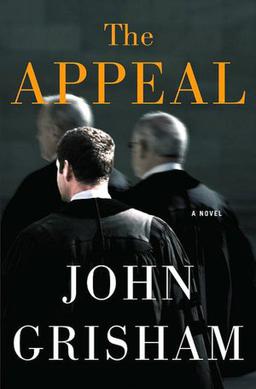 It’s been a long time since I read a John Grisham novel. I used to be quite fond of his legal thrillers, even though they consist of lots of exposition and flat characters. In all of his novels, Grisham writes with a sense of righteous fury at injustice, and sympathy for the little people who are so easily ground beneath the wheels of the system. Unfortunately, as he became the sort of author whose books are routinely made into Hollywood movies, the scope of his plots became larger but the stories somehow became smaller. For me, his first novel, A Time to Kill, a courtroom drama set in a small Southern town in which a lawyer defends a black man who killed the white men who raped his daughter, is still probably his best. (In his author’s notes, Grisham writes about how he himself, as a practicing lawyer, has thrown up in the courthouse men’s room, just as the defense attorney in A Time to Kill does, and that tension was very evident in that book.)

Later he moved on to big criminal/industrial conspiracies, and while those make for good Tom Cruise vehicles, even the most sympathetic characters are overshadowed by the massive forces Grisham is trying to expose in his books.

Paul Iverson is devastated when his wife Lexy dies after falling out of an apple tree. Although the event is called an accident, Paul begins to notice clues that make him wonder about the truth. He embarks on the impossible task of teaching, Lorelei, the family dog and only witness to Lexy's death, to speak. This act leads him on two journeys, one made of memory that begins when he and Lexy first met, and the other which will damage his professional career, and eventually lead him to the answers behind Lexy's death.

The Dogs of Babel is the first choice for the

womenwithbooks  group here on livejournal. To be honest, I'm not sure if it's the type of book that I'd pick up on my own, as I'm mainly a genre girl and this is straight fiction. I'm glad it did get picked for this month's selection as it was quite an interesting read. The Dogs of Babel may sound strange, but at it's heart it's a fascinating study of a romantic relationship. Parkhurst's writing style is quite lovely, very easy to read with a romantic touch. I felt that the subject of death was handled quite well, the embracing the sadness of the situation without going overboard into melodrama.

The chapters go one of two ways. A large portion of the book focuses on Paul's memories of how he and Lexy became a couple up to the final fight they had before her death. This is where the book really shines. I loved getting to learn about this fascinating woman who makes her living making masks. One thing I realized quite quickly, with her dramatic highs and lows, was that Lexy was mentally ill (I assumed bipolar). The other half of the book is a little more uneven. I really enjoyed the sections that focused on the books that Paul and Lexy owned, as what books you own say so much about you (although I was surprised that there weren't that many novels, given that this is a novel). There are other parts of the book which I feel required some serious suspension of disbelief. The concept of a linguist professor attempting to teach a dog to talk is dubious, but acceptable. There were some sections in the later section of the book involving telephone psychics, and dog mutilation cults that seemed a little far fetched to me, and diminished my enjoyment somewhat.

Despite a somewhat problematic plot, I found I enjoyed The Dogs of Babel. I felt a deep sense of sympathy for Paul, a man who was completely in love with one woman, and had to deal with the reality of her death. I am quite glad that it was chosen for the book club this month.

Rating: four stars
Length: 264 pages
Source: Lewiston Public Library
Challenges: This book is not part of any punishments
Similar book: The Lovely Bones by Alice Sebold
Other books I've read by this author: this is my first

"And it's not just a recent phenomenon," Constance said. "Dickens wrote an account of spontaneous combustion into his novel Bleak House. He was roundly criticized by reviewers for it, so he later defended himself by recounting a real case of SHC in the preface to the 1853 edition."

D'Agosta, who had been about to take another bite of steak, put down his fork.

Synopsis: FBI Agent extraordinaire Aloysius Pendergast is reunited with his NYPD sidekick, D'Agosta, on a case of what looks at first glance, like spontaneous human combustion, but later turns out to be pro-pubbed fanfic.